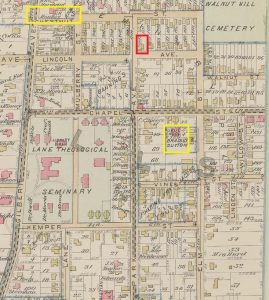 The Black entrepreneurs William H. Fox and Rolla Pryor opened the first “Ice Cream Saloon” on Lincoln Avenue in 1878. We have seen in a previous post that Lincoln had become a majority Black street by the 1870 census. Their business, on the north east corner of Lincoln and Park Avenues, operated in the heart of the African American neighborhood in Walnut Hills, just a block north of the Elm Street Colored School (later called Frederick Douglass). Ice cream was a novelty and a small luxury; it must have been affordable as at least an occasional treat to the nearby population. The Black partners took their place in the business and residential city directories around 1880 as prominently as any white “Ice Cream Depot.”

Who were these ice cream makers? Rolla Pryor appeared in the 1870 Walnut Hills census as a Kentucky-born laborer with $500 in real estate – probably the house he occupied with a large, young family from Kentucky. (Rolla’s family name in 1870 had been transcribed as Merrick apparently owing to a mix-up of first and last names of Merrick Pryor; the 1880 census misspelled it “Prier”.) Born in 1817, it is likely Rolla was born into slavery and freed by the Civil War. Six others in the household were also born in Kentucky between 1854 and 1867, so the family probably migrated to Cincinnati after the Civil War. Census data and directory addresses were vague enough that it is hard to determine whether that house was the building on Lincoln at Park that eventually served ice cream. Pryor continued to work as a laborer through 1878 according to the Williams City Directory.

William H. Fox was born in Ohio in 1848 to parents from Virginia and Mississippi – the family had lived free for a full generation. William had worked as a waiter downtown in the mid-1870s but moved to Pryor’s house on Lincoln Avenue in Walnut Hills in 1878. I have not been able to discover much else about Fox – the white owner of Fox Hardware on Gilbert at Curtis is the more probable source of a few records in our neighborhood.

The pair opened their Ice Cream Saloon in the house they shared on Lincoln Avenue. Fox was in his early thirties. Pryor was about 60 years old, the property owner, and probably the senior partner in every sense of the word when the business opened. The Census of 1880 showed a third African American man living on Chestnut (later Foraker) with the occupation “Ice Cream Saloon.” Abraham Williams, just 21 years old, was listed in the census living with his widowed mother in a family of eight. His occupation appeared as “Ice Cream Saloon,” the same occupation as Fox and Pryor, although I find no other refence to his association with the business while an Abe Williams found employment at another business on Lincoln that year.

Fox and Pryor operated just the second ice cream emporium in Walnut Hills, just a few years after Louis Graeter opened his on Gilbert at Curtis in about 1876. The residential and business directories continued to include the African American establishment among “Ice Cream Depots” through 1883. In 1884 Fox and Pryor, at the same location, was listed as a restaurant; this may have been just a change in the directory classification rather than a change in the business. In 1885 the restaurant listing showed only Pryor as the proprietor; that year Fox worked as a laborer. In 1885 Pryor too returned to work as a laborer, putting and end to the pioneering business.