The parks plans of the progressive era not only resulted in the construction of large facilities like the Deer Creek Commons considered in the last post; Cincinnati also set about building a number of small neighborhood parks. In 1911 the new Park Board spent more than $10,000 for an acre of land in Walnut Hills for a playground. The park grounds lay between Myrtle and Chapel Streets, just east of Ashland Avenue. Such small parks in all but the wealthiest areas were usually aimed at playground space for younger children. Even these small spaces were staffed. 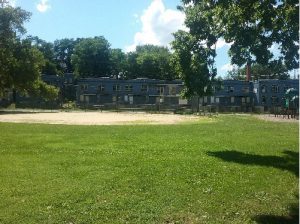 The Walnut Hills Park (now called Ashland Park) also included a baseball field from the beginning. The Park Board instituted a kids’ league in 1912: “A schedule of eight games of playground base ball was arranged between several of the grounds, creating a new interest. Judging from the experience gained from these games, it is evident that the small boy requires the presence of a supervisor to correct and direct his play, as well as his morals.” At first the playgrounds were restricted to children under 14; within a few years the ball diamonds were opened to children up to 16, although a gap remained for seventeen-year-olds who could not yet enroll in adult baseball leagues at the larger parks like the Deer Creek Commons.

The Walnut Hills Playground on Ashland may also have served two public schools, the still-segregated Frederick Douglass on what is now Alms Place, also between Myrtle and Chapel; and the original Walnut Hills High School on Ashland a block south of Myrtle at Burdette. It is not clear what arrangement there may have been for school children using the Walnut Hills Park baseball field. But it is worth noting that the Park was situated in the heart of the Black community in Walnut Hills. 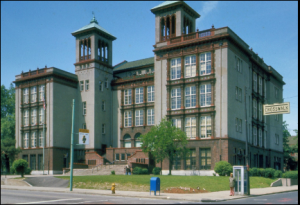 The School Board also made a considerable investment in 1911, building the second incarnation of Frederick Douglass School. Another product of the Progressive Movement, the large School building also served as a center of services for the growing Black community in Walnut Hills. The Great Migration of African Americans from the American South to the industrial cities of the North began in earnest for Cincinnati around 1900, a full decade before it was generally recognized in other cities. The new Colored School building in Walnut Hills included shower baths for the children, with gender appropriate attendants. Moreover, Jacob Schmidlapp’s Model Homes company built the Gordon Terrace apartment and the Gordon Hotel, segregated Black housing projects, right across Ashland Avenue from the Walnut Hills Park.

Surely the park served as a starter field for Black baseball in Walnut Hills. We have seen in a recent post that principal A. J. DeHart (himself a high school and amateur ball player in the 1870s) organized teams at Douglass. His namesake DeHart Hubbard played for Walnut Hills High School in the 1910s.