The Deer Creek Commons, built over a large culvert down the valley between Gilbert Avenue and Reading Road, included the greatest amateur baseball venue in Cincinnati during the first half of the twentieth century. Deer Creek Commons was the home field for the Cincinnati Eclipse Black baseball team in the late 1920s and ‘30s, a team put together by DeHart Hubbard of the Cincinnati Recreation Department. Many of the Eclipse players went on to join the Cincinnati Tigers Negro League team.

Filling the Deer Creek Valley was a twenty-five-year project undertaken in return for permission to build a railroad trestle. Much of the fill was garbage dumped into the slowly disappearing ravine. An ambitious plan for a great Park system in 1906 proposed a 12-acre complex called the Hunt Street Athletic Park. (Hunt Street became Reading Road.) The original drawings gave a larger place to tennis and gymnastics but included two baseball fields. 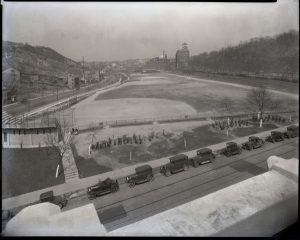 By the time construction was completed the Park Commissioners could report “Hunt Street Athletic Field was sufficiently well graded to lay out three good base ball diamonds, which were in almost constant use, especially on Saturday and Sunday afternoons.” A guidebook to the Queen City the next year noted “the diamonds are in perpetual demand for reservations by base-ball teams from early spring until late fall to see the young men at their merry, splendid play. Those of us who remember the horribly unsightly appearance of the place when it was used for a dump do not a bit grudge the $38,000 that have been spent in reclaiming it.” In 1911 464 games were played on reserved fields; “these figures do not include games played for which permits were not asked.” 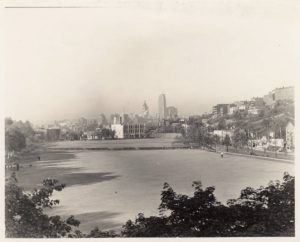