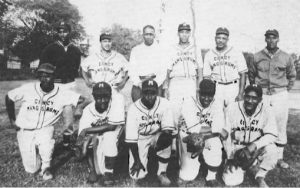 From the 1870s for at least a century, baseball was the national pastime. Everyone from school kids to mature adults played, watched and followed the game. The professional majors excluded Black players into the 1940s and 1950s, but there were Colored teams at every level in the nineteenth century even before the Reds turned pro, and Negro leagues in the first half of the twentieth. In the 1930s and 40s, perhaps the height of segregated baseball and of Black organized baseball, Walnut Hills had several claims to fame. The Cincy Manggrums club, sponsored by the Manggrum Drug Store at the corner of Park and Chapel, has survived in Black baseball memory because there is a picture of the team, ten players posing with the pharmacist William Langston Manggrum.

Amateur baseball in Cincinnati during the 1930s and 40s was almost as segregated as the major leagues. A 1939 article covering Church leagues noted “Three games schedules for the Girls’ League of the Colored Church Baseball Association were rained out Monday and will be played later in the season. Opening contests in the Junior League and the Senior League were to be played Tuesday and Friday.” It is perhaps not surprising that the Church leagues were segregated; Sunday mornings were the most segregated times in the US. But Cincinnati Recreation Commission leagues were segregated as well; DeHart Hubbard, an Olympic Gold Medalist in the broad jump, worked for the Commission as the director of Negro Athletic Leagues from the mid 1920s through the 1930s. Hubbard himself organized a Black amateur team called the Eclipse, reclaiming the name of a Walnut Hills Black team from the 1880s. The Eclipse dominated the action at the Deer Creek Commons baseball complex between Reading Road and Gilbert Avenue just above the Elsinore Gate.

Adult baseball, especially at the less competitive levels, often involved company teams. Black leagues at first often included the waitstaffs of restaurants and hotels. There were few Black-owned businesses large enough support employee teams; Manggrum Drug Store had only a few employees. But the business did sponsor a team; in the 1940s it even supplied uniforms, something beyond the reach of the Negro League Cincinnati Tigers in 1937. The drug store team seems not to have reached a level where their box scores made it into the newspapers, despite the matching uniforms. There are traces of a Manggrums Basketball team in the 1946-1947 season; there were a number of reported losses, with an 0 and 8 record going in to their final game. A victory over the Evanston VFW team, 34-33, salvaged at least a little bit of the season. (It’s interesting to note that, unlike the Rec League Baseball league, the AAU basketball league included both Black and white teams; the Jewish Community Center came out on top. 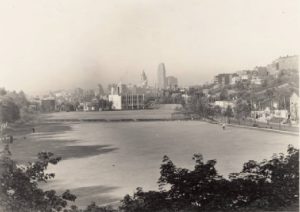 The point of Black Baseball was not only to win. To be sure, Clubs like the Eclipse could win; in exhibition games they played with some of the Negro League teams passing through town with a respectable record. Rather, the point was to solidify a sense of community. The neighborhood could supply the players and the supporters to pass the summer evenings in a safe and friendly way. The Walnut Hills Park on Ashland Avenue had too short a left field for even low-level men’s amateur ball; the Recreation Commission provided six fields at Deer Creek Commons. If the Manggrums did not win, folk could move over to number 6 and watch the Eclipse play, under the lights, with players and plays that rivaled the competition in the white Major Leagues.