We have covered construction projects launched after the Civil War; we’ll take one post to explore a Walnut Hills project that (like the Suspension Bridge project downtown) got off to a good start before the War. Completed or not, a 2-mile long Deer Creek Railroad Tunnel under Walnut Hills appeared on many maps from the mid 1850’s through the mid 1870’s. Unlike the suspension bridge, the tunnel never progressed past the false start in the 1850’s.

Cincinnati’s location on the Ohio River made the Queen City a perfect site for steamboat traffic, and the Fulton neighborhood produced a prodigious number of the craft. Yet the same riverfront location, with the city in a deep basin surrounded by majestic bluffs, made it a terrible place for railroad traffic. Steam engines with barely enough oomph to pull trains heavy-laden with freight on level ground were simply little engines that couldn’t make it up hills. Moreover, fluctuation in the river levels, especially in the years before the twentieth-century dam projects, threatened rail depots downtown with flooding. 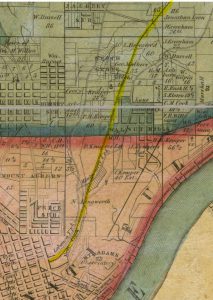 Cincinnati’s captains of industry, especially those with interests in wine and beer, had mastered the art of tunneling into the limestone bluffs overlooking the river. Artificial caves provided immense storehouses with relatively cool temperatures year-round. It seemed that the railroads provided a straightforward engineering problem: how long must an inclined plane be in order to provide a sufficiently gentle slope of .75% for a steam engine to haul freight up the 300-foot rise from the river to the top of the bluffs? The answer came to something like 2 miles, longer than the longest existing tunnel in the world.

Undaunted, Erasmus Gest, a canal and railroad engineer of wide experience, in about 1852 set about constructing a tunnel under Deer Creek and Walnut Hills, more or less under the path of today’s I-71 from about Elsinore to Blaire Avenue – a project under rather than through Walnut Hills. Gest had no trifling ambition: he planned a stone and brick lined tunnel large enough to accommodate two parallel wide-gauge tracks, an arched space about 25 feet wide and 20 feet high, with more than 9000 feet of full tunnel and hundreds more of trench, especially at the north end. The Deer Creek Tunnel proceeded from five points of excavation – the two ends, and three shafts dug down from Walnut Hills, the deepest nearly 200 feet down to the level of the tunnel. The debris from these sections was lifted to the surface and carted away. After the first two years of construction, about a third of the tunnel was excavated, and something over 1500 feet were finished with the brickwork, ready to lay track.

The project absorbed nearly half a million dollars of capital – including $50,000 of Gest’s own money – before the end of 1855. Like Roebling’s Suspension Bridge downtown, the tunnel project stopped midway after running out of money.

A. W. Gilbert’s 1856 property survey of Hamilton County is the first important map to show the railroad with its tunnel, highlighted in the detail shown here.