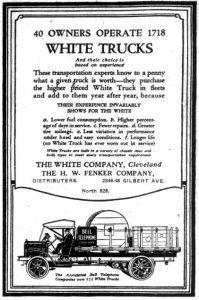 In the 1910s Gilbert Avenue became an auto dealer’s row. In 1914 the 31-year-old financier Howard W. Fenker went to work for the White Motorcar and Truck agency at 2417 Gilbert just a block south of Peebles Corner. Late the next year he invested $50,000 in a building across the street at 2346 Gilbert and took over the agency.

In the summer of 1915, a small boy sought a business appointment with Mr. Fenker. He had a proposition. As the captain of an aspiring baseball team, he offered to name his group The White Motor Car Company Brendamour Midgets in exchange for uniforms from the dealership. (Brendamour was a sporting goods store than sponsored leagues from the midgets up through semi-pro teams.) Fenker, a member of the board of the Walnut Hills Savings and Banking Company, did his due diligence: he watched the boys’ practice. Convinced the ask was legitimate, he ordered uniforms and, he said, promptly forgot about his investment.

The Whites, as they were called in the league, joined a new “Group 3” of the youngest boys in the system. The season was well-documented in the newspapers, down to the late start for Group 3 on June 20. Three games that day pitted the Main Street Juniors vs the Clayton Cubs, the Lick Run Juniors vs the Evanston Midgets, and the Gold Bells vs the Whites. The Whites were defeated in that first outing. 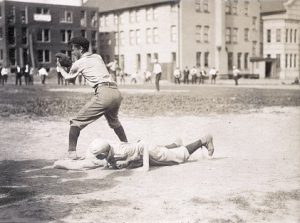 A month later had the Whites tied with the Lick Run Juniors for second place at 2 wins against a single loss, behind the 3-0 Golden Bells. Early August saw the Whites alone in second place at 3-1, still trailing the undefeated Bells. The newspaper account noted Group 3 “is the youngest of all, … but this division is putting up a brand of ball as good as any seen in Midget circles. The Gold Bells, owing to the fact that the season has not very long to run, doubtless will canter home a winner, but the Whites have a fine chance, for one victory for them in case the Gold Bells drop a game would throw them into a tie.” On August 22 the Bells still led the league at 4-1, while the Whites, a game short, had gotten to 3-1. There was still time, as the Whites took on the stumbling Lick Runs, and the Gold Bells played the hapless Clayton Cubs. Both of the leaders won, but “a decision on an old game is still pending and it may be than another game or two will have to be played in this division. Then will come the championship contests.”

The Gold Bells did not complete their cantor. By the end of the season, “the Whites heaved themselves into the leadership by defeating the Gold Bells, who have copped second honors, by a score of 6 to 4 in a most exciting and snappy game.” In the final standings, the Whites triumphed with a record of 6-1 or .857 – their only loss in that first game against the Bells – while those arch-rivals fell to 7-2, just .778.

Howard Fenker had a vague memory of the young captain telling him the Whites were headed for the championship game; again, the sponsor paid little heed. In the happy made-for-publicity ending, the boys finally showed up at the White dealership on Christmas Eve. According to a story planted in the newspaper in the first days of the new year of 1916, they presented their sponsor with the championship trophy! Fenker thanked them but suggested that the teammates should keep it. The boys responded that they had talked it over; they owed him because of the uniforms. “Besides, you have a nice office and a nice home to keep it in and we haven’t, so it’s best that you should have it.” The boys insisted and the cup remained at the White dealership. Completing the Miracle on Gilbert Avenue, Mr. Fenker sent an employee to the bank while the owner himself entertained the team. The underling returned to present each of the players with a gold coin. On New Year’s Eve, putting the publicity over the top, Mrs. Fenker prepared a fine meal for the team and provided each child with a silk necktie and a solid silver baseball stickpin. (These choices may have been determined by her own taste rather than an intimate understanding of the boys, who hadn’t a nice house among them.)

The trail of the White Motor Car Company Midgets unfortunately goes cold at that point. Despite positive noises by Brendamour late in the 1915 season for another midget league the next summer, if it got going the papers provided no coverage. The nameless small boys on the White team may or may not have continued their association.

H. W. Fenker got occasional press mentions in 1916, usually for selling heavy trucks to big Cincinnati firms like H & S Pogue and the Lunkenheimer Valve Company. In 1917, continuing in his community-minded spirit, the 34-year-old “retired from his company to be a soldier.” He served as a major in the Buckeye 37th, a national guard division, and engaged in heavy fighting beginning in France in August, 1918, and moving on to Belgium in October. After the war he did not return to Cincinnati.

The White Company shifted production from cars to heavy trucks; the dealership left the expensive space on Gilbert Avenue to move to the heavier machinery neighborhood just east of Reading Road. By the mid-twenties, the Fenker’s fine building hosted another car dealer.