Eden Park today presents many forested hillsides, part of a city-wide strategy to prevent erosion and minimize mudslides on the ravines and bluffs above the Ohio River. Before the Civil War, the land had been cultivated as a vineyard, with the side-effect of stabilizing the hillside with the roots of the vines and the attention of the largely German immigrant farmers who tended Longworth’s garden. In the early years of the Park, however, the city tended the expanse as broad lawns, with plantings of flowers and shrubs. 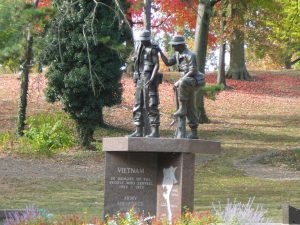 Into these vast lawns, early patrons of the Park planted a series of groves of trees. In 1876 as part of the Centennial of the United States, Col. A. E. Jones, a great booster of both Eden Park and Walnut Hills, brought 33 oak trees from the Revolutionary War Valley Forge site in Pennsylvania. He planted these in a “Heroes’ Grove” near the north-east corner of the park, the highest point on the grounds. The grove nestled on the north-facing slope below the current Cliff Drive just west of the 1894 Melan Arch Bridge. (Cliff drive and the bridge at the time were just vague figments of planners’ imaginations; the current Twin Lakes Overlook across Eden Park Drive to the east was the still-active quarry for the still unfinished reservoir wall.) Col. Jones lived and owned property on Park Avenue, across the Kemper Lane ravine north of Eden; the grove undoubtedly improved his vista.

The 1876 planting by no means ended Jones’ urge for memorializing nor his propensity for creating groves. Jones played the central role in two events in 1881. He organized a massive memorial ceremony in the new Music Hall housing the portraits of 339 deceased Cincinnatians. Jones also published an accompanying memorial volume.  Hundreds of Cincinnati families wrote up eulogies which Jones edited and published as at once a public service and a business venture.  (His brother Frederick, who died in the Union Army during the Civil War, had a prominent place in the book.)

In other memorializing activities in 1881, during a centennial celebration of the surrender of the British at Yorktown, descendants of the Prussian General von Steuben paid a visit to the US. Their itinerary included a stop in the heavily German city of Cincinnati. Col. Jones found himself in the company of Baron Richard von Steuben, “Chief Forester of the German Empire.” In conversations with the Baron, Jones found himself among “some of the gentlemen of the city” who “became so interested in the subject of forestry, that they met in conference in January 1882, to take measures to interest the people in the subject.”

By April 27, 1882, Cincinnati was ready to celebrate its first Arbor Day. It proved a rather startling extravaganza with crowds rivaling those of modern-day corporate sporting events and rock concerts.

The city was in holiday attire. The soldiery and organized companies of civilians … marched to the park where command was turned over to Col. A. E. Jones, the officer in charge. The school-children were under the charge of Superintendent Peaslee. Fifty thousand citizens covered the grassy slopes and crowning ridges, those assigned to the work of transplanting trees taking their respective places.

At the firing of the signal gun “Presidents’ Grove,” “Pioneers’ Grove,” “Battle Grove,” “Citizens’ Memorial Grove,” and “Authors’ Grove” were planted and dedicated with loving hands and appropriate ceremonies.

We shall return to Arbor Day 1882 in a couple of other posts, so stay tuned. Here we are concerned with memorializing. 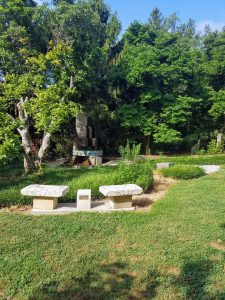 It is worth observing that both the planting of memorial groves and the creation of memorials have continue at least sporadically in Eden Park ever since. A new Heroes’ Grove was dedicated to veterans and fallen soldiers from World War I on the slope now occupied by the Park Board office. Two benches by the Twin Lakes, one of marble and one of rustic stone, bear additional witness to the World War I era soldiers. The magnolia Grove between the Krohn Conservatory and the old Pump House and lower reservoir includes a number of Citizens’ Memorials, some of them to my eye quite lovely or moving. And Jones’ original Heroes’ Grove, on the northern slope below the 1895 water tower, now holds a memorial to Veterans of the Vietnam War.